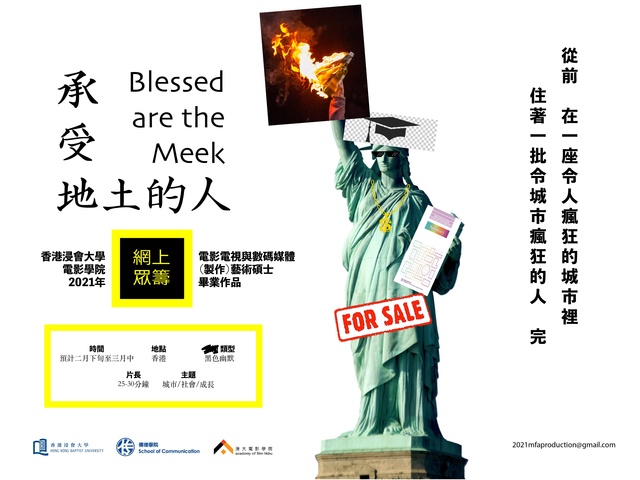 Set in contemporary Hong Kong from an alternative timeline, it tells the story of Tak, a final year student majoring in Urban Studies, and his peculiar research topic which aims to burst the long-standing and impregnable housing bubble. During his research, he accidentaly comes up with an ingenious yet extremely radical way to deflate Hong Kong's housing market--by pretending to be a terrorist targeting the overzealous investors and dealers. As the plan rolls into motion, an ideologcal rift gradually surfaces among the focus group members he had recruited which threatens to fundamentally change Hong Kong's society as well as their personal lives.

The Crew and Cast

Currently, I have assembled a crew of about 20 and cast of 40 (including supporting roles) from various backgrounds. Most of the crew are passionate film students who take up their roles on a volunteer basis. The main crew and cast are also willing to take a heavy discount in support of students' productions.

My preliminary budget of the film is around 100,000 HKD. Half of that budget will be allocated towards the main crew and casts. The other half will be divided among logistics, set and costumes, locations, and other miscellaneous costs.

So far we are in the pre-production period where we concern ourselves with planning, cast, art design, and budget. According to current schedule, the principal shooting will take place in the first week of March. If it goes well, a rough cut will be produced in April and a final cut in May for the thesis panel's consideration. Should the situation allows, there will also be an MFA thesis screening for the public's inspection.

Although I only set my goal to 20,000 HKD, it is clearly far from enough to complete the project. Since this is ultimately my project, I rightfully bear the majority of the cost. During the course of my studies, however, many of my friends show great enthusiasm and support to my seemingly futile pursuit of passion. Therefore, I would like to invite the community to participate, for one final time, in this journey of light and shadow. Your support makes it far more bearable psychologically and financially alike.

There really isn't much I could offer in return except for, perhaps, the film itself. I could not guarantee that all those who support its production could get a glimpse of its final form but I will do my best to make it the case. On the other hand, I feel that an acknowledgement of gratitude is due for those who are willing to back up the project with real actions (100HKD). If you are willing to do more than that, I welcome you to a small circle where you will get access to exclusive behind-the-scene materials (500HKD).  However, if you are an avid enthusiast of movie posters, you may consider opting for the more bountiful option (2000HKD) where you can get a movie poster signed by the director (me!) personally. Finally, if you somehow get tired of not spending enough money (a very common phenonmenon in life, I reckon) then perhaps you may want to go for the "Big Mac" option (10,000HKD) and I will personally deliver those delicious burgers to your footstep and share a pleasant evening toasting to it.

Well, to be completely honest, I haven't really figure that out yet. Maybe I will find a 9-to-5 job to pay off the debt; maybe I will take this film abroad and participate in some insignificant film festivals or competitions; maybe some film producers will hire me on the spot... but these are too early to even think about. My goal has always been the same: to make films. I may not be the most talented / hardworking / creative / or even passionate filmmaking student out there, but I have always been a lucky one. I know opportunities like these do not come freely and I am extremely grateful for all who had helped me along the way. Let's see if luck is indeed my superpower.

NG Jeremy Eton (born 1995) is a Master of Fine Arts Candidate from the Academy of Film, Hong Kong Baptist University. He had obtained his Bachelors in Social Sciences (Urban Studies) from The Chinese University of Hong Kong. As a Hong Konger who was born in the United States and raised in Shanghai, he is an acute observer of city, society and culture. He began his journey in filmmaking in highschool where he learned to utilize this powerful language to express his thoughts and feelings. He loves cats, a lot, especially the fat ones. 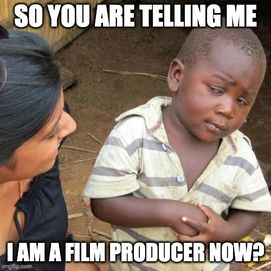 Your name will be listed in the "Special Thanks" section of the film's credit scene. 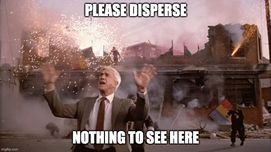 You will be entitled to the exclusive "Behind the Scenes" materials. 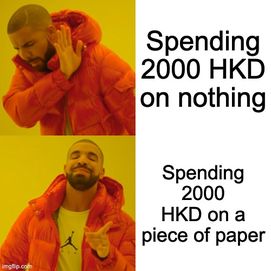 You will recieve a poster with my signature on it (not like you really want it anyway)!

"Anybody willing to donate that much deserves a private dinner. Come in."